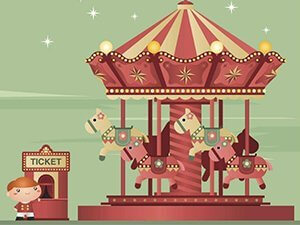 The oldest predecessor of the carousel came from Byzantium in the 6th century. At that time, people hitchhiked with the basket, which was tied to a pole in the middle to carry the rider. But the real inspiration for modern carousels came from cavalry games and sprints in Europe and Asia in the 12th century. At that time, in a riding competition, a group of riders rode in a circle, throwing fragile balls filled with perfume against each other, which required superb skills.

This game (known as the “little baton” in Garosero in Italy and Carosella in Spain) changed in the 17th century, starting with the riders, who tried to pierce the small hanging on the pole above the head Ring and tear it off. The cavalry ended the riding, but the cavalry game remained, and civilians began to participate. At that time, the first mock-up carousel children appeared.

Larger carousels, first appeared in the late 18th century when they began to spread in Central Europe and the United Kingdom, where they became popular in outdoor playgrounds. The first platform carousel was made in the 19th century. They are called Dobbys and have a platform that rotates with animals and tanks fixed on the platform and is manually operated.

The first steam-driven carousel was invented by Thomas Bradshaw in 1861 and was part of the Elsham Market. Frederick Savage began making carousels in 1870 and invented the classic mechanism to make the carousel move up and down like a gallop. Soon, modern carousels traversed the Atlantic Ocean and were very popular in the United States before the Great Depression began. After the depression, they came back slowly, but never as glorious as before. Today, there are many variants of the carousel, and only a few carousels from the golden age can still work normally after repair.

The largest carousel in the world is in a house on the rock. It has 269 hand-carved carousel animals. The carousel basically has three postures: all four legs are on the ground, called “standers”, two legs are on the ground, two legs are in the air (called “jumpers”), all the legs are in the air, called “Jumper”. The “jumper” can also move up and down. Wooden carousels are rarely made of a piece of wood. The central part is usually connected by wooden boards to wooden blocks and then formed. This forms a hollow body with the head, legs, and tail attached to it.

Today, carousels and other animals are made of aluminum and fiberglass but are usually modeled after classic horses.

The oldest carousel known to work in the United States was Salem, Massachusetts. It worked in 1799 and was called “Trojan Circus Ride“.

The oldest carousel operating platform in the United States is the Pegasus Carousel at Oak Bluffs, Massachusetts. It was designed and built by Charles Dale in 1876.