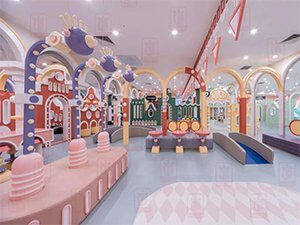 In recent years, a hot indoor theme park gradually turned his attention to cartoon IP. Embed well-known cartoon IPs in theme parks, not only received unprecedented experience and pursuit. It also gives the theme park more lasting vitality.
In order to make the scene and the IP image more integrated, the Damo design team spent a lot of time to understand the characteristics and differences of each IP image before planning and design, fully combining the site characteristics and project appeals, and conducted a comprehensive analysis, and set a variety of games play and routes according to the children’s adventurous spirit, and finally decided to use “toy factory” as the main storyline and design ideas. The creative cartoon world is flexibly combined with game devices and functional partitions to provide children with rich and diverse game experience, create a vivid and fun game space, let children release their playful nature, choose the game mode independently, and reap the joy of playing growing up.

The total construction area of Cartoon Planet is about 6,000 square meters, and the main consumer group is the parent-child family. In terms of infrastructure configuration and amusement facility configuration, Damo designer has made full consideration and design. I believe everyone has long been looking forward to it. Let’s first look at the design details of Damo art in various areas of the cartoon planet …

In addition to the core function design of paradise, it is necessary to be humanized. As a key public space, its design concept, design methods, and design elements are particularly important. Because it is not only a facade but also a business card for publicity.
Therefore, in the design of the public area of the cartoon planet, the designer has considered extremely meticulously. In order to highlight the “toy factory theme”, the design of the entrance of the indoor park has incorporated a large number of pipes and cartoon IP elements, conveying the design concept of the park, making the image of the whole paradise in the hearts of tourists is plumper.

The huge cartoon IP image is used as a display to form a good external publicity effect, plus the rich and subtle indoor scenes and the appearance to stimulate the curiosity of children and parents and attract them to explore the indoor playground.

After entering, first of all, what we saw is that from the floor to the wall and even the ceiling, there is a device with a workshop conveyor belt, and the interactive modeling of the machine interspersed among them is used as a scene embellishment to create a busy production scene of the daily workshop, let the small in the process of playing, pot friends are more immersive and immersive.

Looking forward, you will find that there is a super realistic logistics system function, and the transportation tracks and the transported goods are also restored one by one. In order to create a more realistic scene, the track of the train also extends to the ground of the entire paradise, increasing the children’s game movement and games play, so that the children are always immersed in the joyful game atmosphere.

At the same time, the designer also cleverly put the application functions such as “amplified toys”, “gift boxes”, “robots” and “game consoles” into it, as if creating a new space in a limited space, combined with sound and photo game devices Interesting interaction enhances the communication between children while training children’s thinking, hands-on and social skills, creating an immersive transport and tourism experience.

Through the scientific combination design, the cute and eye-catching cartoon shape is used as a decoration, and the two elements of pipeline and cartoon IP are seamlessly matched to perfectly interpret the landscape of the toy factory, making the scene space more stylish and technological. Let the children enjoy themselves in the cartoon planet world, uncover the mystery of the unsolved mystery, and benefit from the wisdom, fun, and joy.

In addition, the designer also made full use of the venue to design a variety of game devices and ways for children to run, jump, hide, etc., to meet children with different personalities. At the same time, there is also a game line that communicates up, down, left, and right across the field to guide children to explore, discover, play, and interact.

Rather than saying that Cartoon Planet is a parent-child paradise, it is better to say that it is a dream-making factory with long-term knowledge. Here, children can explore endlessly, get to know the long-lasting cartoons, and can also integrate performances and activities with the protagonists on TV. Children can enjoy laughter and enjoyment in play, which enhances children’s recognition of cartoon characters, is beneficial to develop imagination and creativity, and improve practical skills and life skills.