The Most Exciting Amusement Facility in Theme Park 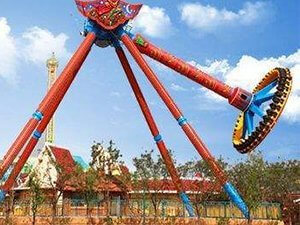 According to the investigation, it is supposed that the big pendulum is the most exciting facility in the theme park. One of the interviewers said he would never play this equipment again. He could not bear the weightlessness. When he was sent to the highest point, he felt pale and could hardly say a word. As the machine gradually rose to the top, all of a sudden, it fell down to the ground and he almost vomited.

Visitors sit in a round cockpit, facing outward. Usually, the big pendulum uses the shoulder as a safety restraint, and a safety belt as secondary insurance. While the cockpit rotates, the main shaft of the hanging cockpit makes a single pendulum movement driven by the motor. The operation of the big pendulum can make the tourists on it thrilling. Big pendulum belongs to stimulating amusement equipment.

Compared with the roller coaster, the big pendulum is much more exciting. Roller coaster usually costs 1.5-2 minutes, a short period. While, pendulum costs 3 minutes, much longer than a coaster. During the pendulum period, people can experience thrilling times. As for roller coaster, only twice. When the pendulum begins to roll and swing, people feel like flying and weightless. After several times of this experience, people start to feel dizzy, even some of them just want to vomit.